The birthday cake has been an integral part of the birthday celebrations in western European countries since the middle of the 19th century, which extended to Western culture.

Certain rituals and traditions, such as singing of birthday songs, associated with birthday cakes are common to many Western cultures.

The Western tradition of adding lit candles to the top of a birthday cake originates in 18th-century Germany. However, the intertwining of cakes and birthday celebrations stretch back to the Ancient Romans.

advancement. While throughout most of Western history, these elaborate cakes in general were the privilege of the wealthy, birthday cakes are nowadays common to

In early Europe, the words for cake and bread were virtually interchangeable; the only difference being that cakes were sweet while bread was not. In the 15th century, bakeries in Germany conceived the idea of marketing one-layer cakes for customers' birthdays as well as for only their weddings, and thus the modern birthday cake was born. During the 17th century, the birthday cake took on more or less its contemporary form.

The cake, or sometimes a pastry or dessert, is served to a person on his or her birthday. In contemporary Western cultures, the birthday person blows out the candles on the cake after those celebrating have sung the birthday song. 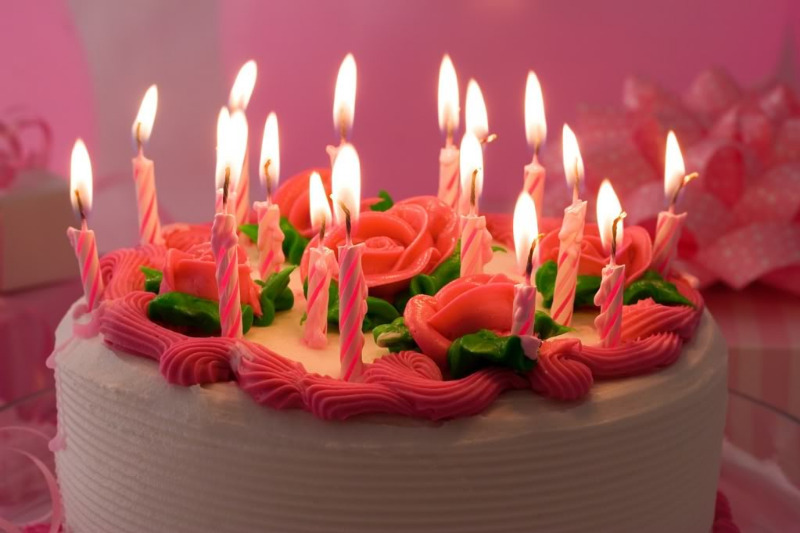 Elaborate birthday cake with no candles

The birthday cake is often decorated with small taper candles, secured with special holders or simply pressed down into the cake. In North America, Australasia and the U.K., the number of candles is equal to the age of the individual whose birthday it is, sometimes with one extra for luck. Traditionally, the birthday person makes a private wish, which will be realized if all the candles are extinguished in a single breath.

To represent a sharing of joy and togetherness, the cake is shared amongst all the guests attending the party.

As a courtesy, it reflects one's hospitality and respect for guests.